In honor of the new Force Awakens Trailer being released (which is AWESOME by the way), I thought it’d be cool do a few of the Star Wars races up for kick ass White Star RPG system.

Humans exist anywhere in the galaxy.  Humans are tenacious and somehow always able to get themselves out of trouble.  Humans with one skill of their choice and also are born with innate luck.  Once per session they are allowed to reroll one failed roll. 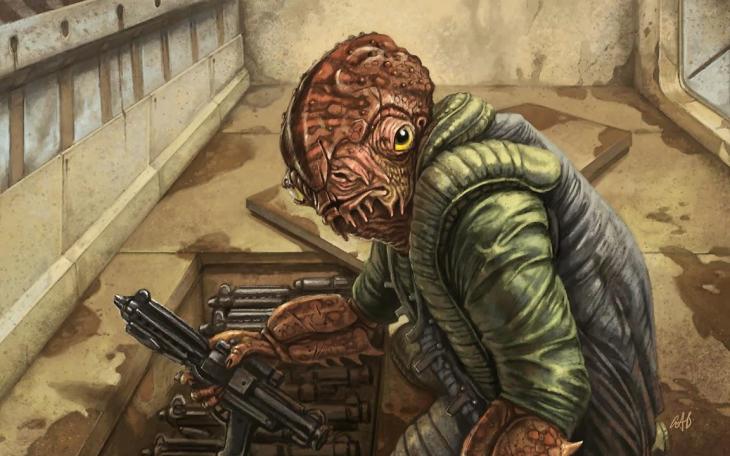 Amphibious: Mon Calamari can breathe in both oxygen and water.

Swim: Mon Calamari start with the swim skill (for stunts and complex movements) and have a swim speed of 24’.

Calculating:  Mon Calamari are smart.  Change their Intelligence score to 15 if they rolled anything less. 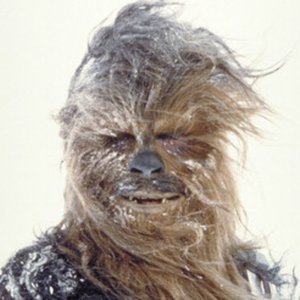 Strong: A wookie can pull people’s arms out of their sockets.  Change their strength score to 16 if they rolled anything less.

Rage: Wookies can fly into a rage. For the duration of one combat the wookie gains + 2 to attack and damage and + 2 saves against mild-altering and fear effects, but suffers -2 to AC.  After combat the wookie is exhausted and suffers -2 to all rolls and AC until they rest fully for one hour.  This ability cannot be used again until the exhaustion has passed.

Claws: Wookies have claws that they can use in battle, however it is considered a terrible crime to do so, and that the wookie has given over to their animalistic side.  Their claws do 1d6 damage.

Bowcaster: The bowcaster is a weapon created by wookies that fire superheated slugs.  A wookie begins play with a bowcaster (2d6 damage). 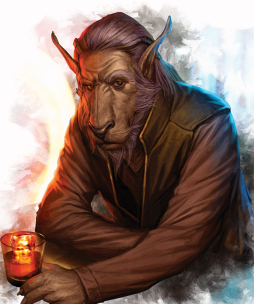 Scent: Bothan have a strong sense of smell.  They start with the scent skill.

Strong-willed: Bothans are not an easily manipulated people.  They roll 2d20 and take the higher of the two on any save against mind-altering effects, attempts to intimidate, etc.

Connection: Bothans have a web of connections and contacts.  A bothan starts with an additional level 2 contact at level 1 (see rules below). 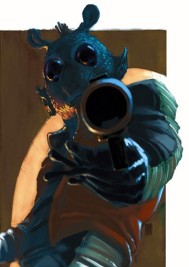 Tracker: Rodians are natural hunters.  They start with the tracking and notice skills.

Violent Upbringing: Rodians tend to revel in violence, hence why many become bounty hunters or thugs.  A rodian is able to use any weapon (except a lightsaber), regardless of class restrictions.

Ignore Pain: Rodians have a thick skin and ignore 1 point of physical damage. 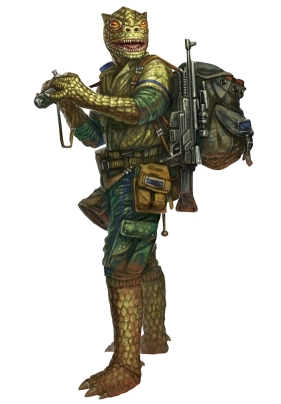 Stealth: Trandoshan are sneaky and devious.  They being play with the Stealth skill.

Claws: Trandoshan have claws that they can use in combat.  Their claws do 1d6-1 damage.

Strength: Trandoshans are strong creatures.  Change their strength to a 15 if they rolled anything less.

Lekku: All twi’lek have brain tails on their heads that make it difficult for targets to sneak up on them.  The threat range of a creature attempting to surprise a twi’lek is reduced by 1 (IE. a thug that normally would surprise a target on a 1-2 on a d6 is now only able to surprise on a 1).  Twi’lek are able to communicate with one another through the movements of their lekku.

Charisma: Twi’lek are renowned for their physical beauty (especially females).  Twi’lek roll 2d20 and take the higher of the two for all Charisma tests.

At character creation a play can create two level 1 contacts or one level 2 contact.  After this initial point, all contacts must be gained through role-playing.  A contact could be a whore, a starship captain, a hacker, a bouncer at a local bar, a fixer, a fencer, etc. It’s up to the player to decide who they are.

Level 1 Contacts- Standard contact. You use them sometimes and they may remember you, but then again they might not. They could have information you need, but they also might not know a Hacker from a shoebox. They have no loyalty to you and would rat you out at the first sign of trouble.

Level 2 Contacts- You see them on a semi-regular basis. You may have done a few favors for them, or passed enough credits their way that they’ve become more endeared, to you and you’ve become buddies. You receive +1 to Charisma checks when attempting to get a Level 2 contact to do something for you.

Level 3 Contacts- These are more than buddies to you. They are stout friends who will stand by you. You may have grown up with this person, or saved their life. You see this person on a regular basis, and really don’t even think of them as a contact anymore. Usually a level 3 contact will do whatever they can to help you- even risk bodily harm.  If a test is needed to convince the contact to help you in some way, you receive +2 to the Charisma check.

This is in conjunction to the Tech Specialists Connections ability.