Here are some new robot variants for the awesome White Stars.

Infosophont: Infosophonts are AI beings that exist free of a permanent body.  Their “bodies” are data storage boxes that are protected (and often times hidden) by security measures, firewalls, and even automated weaponry.  Infosophonts have the ability to put their consciousness into various chassis (being the other robot types listed below and in White Star pg 27).  The infosophont must have purchased a new chassis (or hacked into one that has not been programmed with its own personality and abilities).  The infosophont gains all the abilities of that chassis and can stay in that body indefinitely.  A chassis costs 1,000 credits.  An infosophont has two versions of hit points.  They have the hit points of their level and hard points, which is how much damage their AI data storage box can take.  When a chassis is destroyed the Infosophont suffers 3d6 hard point damage and its consciousness is immediately transported back its data storage location.  The Infosophont can then place its consciousness in a new chassis (if it has one available).  Doing so takes 3d6 rounds to boot the new chassis up and upload the AIs consciousness.  Hard Points are repaired very slowly, at a rate of 1 per day as the Infosophont has to repair and rewrite damaged code and programs.  An Infosophonts Hard Points are equal to their Constitution score.  Should an Infosophont be reduced to zero Hard Points, their program shorts out and is damaged beyond repair.  Infosophonts are from Strange Stars.   Here is more on Infosophonts from Trey.

Deadly Aim: If the Scout has a sniper rifle (laser or ballistic) and does nothing but aim at a target for 2 rounds their shot is deadly accurate.  The target must succeed a Saving Throw or be killed by the Scout’s shot.  A target that succeeds at their Saving Throw suffers 2d6 damage. 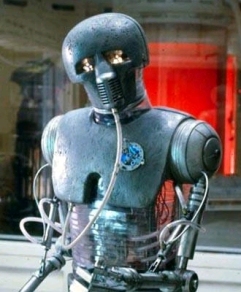 Medical: Medical robots are highly appreciated for their expertise and quick ability to patch up patients.  Under the care of a medical droid a target recovers double the hit points back per full day of uninterrupted rest.  A medical droid is able to shut down for 8 hours to synthesis needed medical supplies.  During this time the robot cannot run self-repair and being in this state does not count as the robot shutting down to recharge, however the medical robot is immobile and out of the action during this time.  At the end of the 8 hours the robot has generated 1d3 med kits and 1 anti-poison pill, these go inert if not used within 24 hours.  Once per week the medical robot is able to fabricate an Adrenaline Booster (WS, pg 97).  The Adrenaline Booster goes inert if not used within the week.  Medical robots have a stun gun and a laser pistol attached to their chassis.  A target hit with the stun gun must succeed a Saving Throw or be stunned for 1d4 rounds. 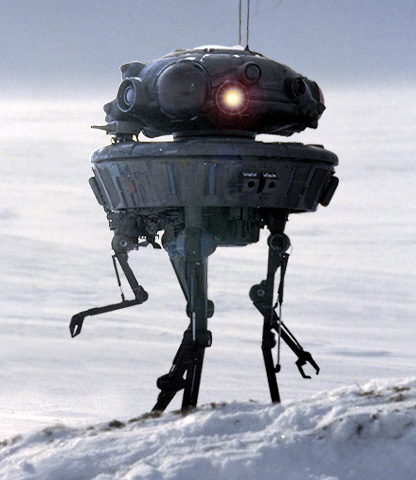 Scout: A Scout Robot does not have legs, but instead hover jets that give the robot a movement of 12 feet and allows the robot to hover up to 15 feet off of the ground.  Scouts are have the skill Tracking.  Scout robots can survive even in the harshest environments and do not suffer any environmental damage from heat or cold.  Scout robots have the ability to record video and audio for up to 150 hours and transmit their recordings to another receiver.  Scout robots have a with a laser pistol and laser rifle built onto their chassis.  The scout robot has either stealth armor or a personal cloaking device installed (WS, pages 95 and 98).  Player’s choice. 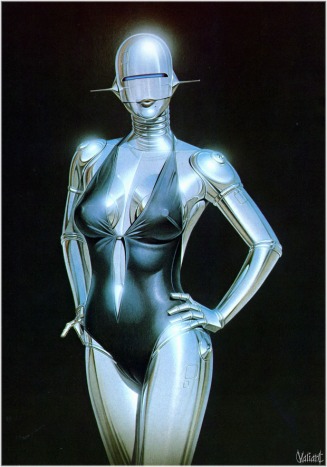 Pleasure Model: This model of robot looks like an extremely attractive humanoid.  These models are popular in many seedy dens of debauchery and sin as they don’t need as much rest as true humanoids, do not need food or water, and are able to tailor themselves to the needs and desires of their customers.  Change a Pleasure Model robot’s Charisma to 16 if the character rolled anything less.  Pleasure Model’s have the skill Persuasion.  Pleasure Model’s also make great manipulators and are able to wrap a mark around their finger.  A Pleasure Model is able to use the Silver-Tongue ability (Aristocrat, pg 17) with any target that they are “engaged with.”  Pleasure models are proficient with daggers, mono-daggers, and laser pistols.

I am a History major attending a community college until I can get more financial aid and attend a four year school. I am living in NJ with my girlfriend who is currently wrapping up on obtaining her PhD in Toxicology. I love Star Wars, Role-playing, video games, working out, reading, writing, and hanging with my girlfriend, dog (Perfect), and two kittens (Birch and Brambles). My main focus on this site will be my discussion of Role-playing games and ideas and hopefully contribute something worth a damn. END_OF_DOCUMENT_TOKEN_TO_BE_REPLACED
This entry was posted on Sunday, May 10th, 2015 at 9:40 am and posted in Role-playing, Strange Stars, White Star. You can follow any responses to this entry through the RSS 2.0 feed.
« Quick and Easy Psionic Abilities for White Star
The Bionic Soldier- New Class for White Star- and New Cyberware Options as well »