The Gnomish Embassy posted an bunch of cool alternative class options for the Pilot class recently.  It inspired me to create a Swoop Class of my own for my upcoming Strange Stars campaign.

Swoop racers seek the thrills of speed on their heavily-modified swoops.  These speed demons are known for their reckless devil-may-care attitudes and live and die as fast as their vehicles.  They often take to the stars searching for new terrain and courses to race on, forming an entourage of other racers that accompany them. 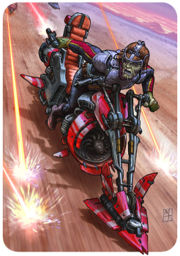 Pour it On!: Swoop racers know how to fiddle with their rides and get a little more juice out of them.  The Swoop Racer is able to double their vehicle’s speed for 3d6 rounds by succeeding on a Savings Throw.  A Swoop Racer’s vehicle can only handle one burst of speed per hour.  Doing any further bursts of speed will destroy the vehicle’s engine.

Road Warrior: Swoop Racers are highly skilled at riding their vehicles in all sorts of environments.  Once per session a Swoop Racer is able to reroll one Dexterity check or failed Saving Throw when it is dealing with their ride.

Shoot on the Go: Swoop Racers are able to shoot a one-handed weapon (laser pistol or firearm) while driving their ride without any modifiers while anyone else who attempts this suffer -4 to their attack roll.

Gang Leader (4th): At 4th level a Swoop Racer becomes the leader of a gang of other aspiring Swoop Racers.  This crew is known for their brash and sometimes thuggish behavior and will come to the aid of their leader should it be needed.