Continuing on the road of Savage Worlding the races from Trey Causey’s awesome Strange Stars.  Today we look at the Thrax. 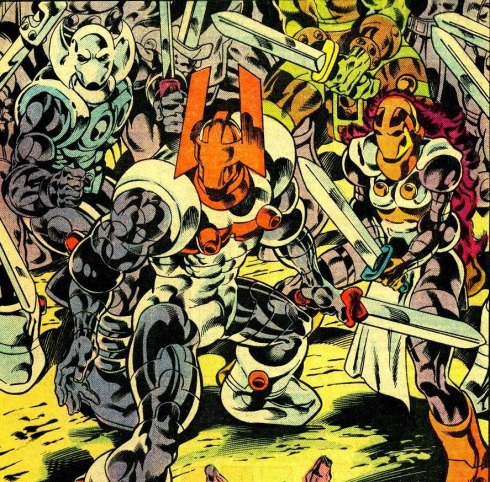 Not actual art from Strange Stars, but still a bad ass picture.

“The Alliance’s greatest warriors are the thrax. A clone race created for conquest by a long-forgotten culture, they still structure their society along martial lines (SS, pg 10).”  Here is a post by Trey about the Thrax.

Brute: Thrax have been engineered to be strong.  They begin play with a d8 in Strength instead of a d4.

Monomolecular Blade: The most important possession to a thrax is their monomolecular blade, which is a symbol of their stature amongst their own kind.  This massive two-handed weapon does str+d10 damage.  Each weapon has a battery pack in the hilt, that when activated causes the blade to become monomolecular (though an advanced electrical field).  When the blade has been transformed into a monomolecular blade, it deals an additional 4 damage and has 5AP.  Treat the blade as a weird science gizmo.  The blade has 10 power points and utilizes the Smite spell (SWDX, pg 116).  Activating the blade consumes 2 power points and lasts for one round.  An additional power point is consumed each round thereafter.  Expend more PP for longer duration.  Recharge is 1 PP per hour (SWDX, pg 102).

Skilled Fighters: Thrax are trained to fight and begin with a d4 in Fighting.

Battle Armor: Thrax begin with battle armor that grants +4 against ballistic and melee attacks (but no protection against energy weapons).  Replacing this armor costs $1,000 credits.

Glory and Honor: Thrax believe in honor and it has been instilled in their culture since its creation.  Thrax all have the Code of Honor hindrance (SWDX, pg 28).

Bull-headed: Thrax are stubborn creatures.  They have the Stubborn hindrance (SWDX, pg 31).

Cloned Being:  Many cultures are not comfortable with what the Thrax represent.  When not among their own kind a thrax suffers from the Outsider hindrance (SWDX, pg 30).  Should a thrax ever lose their monomolecular blade they are treated as an outsider amongst their own kind as well.

I am a History major attending a community college until I can get more financial aid and attend a four year school. I am living in NJ with my girlfriend who is currently wrapping up on obtaining her PhD in Toxicology. I love Star Wars, Role-playing, video games, working out, reading, writing, and hanging with my girlfriend, dog (Perfect), and two kittens (Birch and Brambles). My main focus on this site will be my discussion of Role-playing games and ideas and hopefully contribute something worth a damn. END_OF_DOCUMENT_TOKEN_TO_BE_REPLACED
This entry was posted on Sunday, March 29th, 2015 at 7:15 am and posted in Role-playing, Savage Worlds, Strange Stars. You can follow any responses to this entry through the RSS 2.0 feed.
« Strange Stars Races- Savage Worlds Style, Baby- Humans and Djägga
Strange Stars Races- Savage Worlds Style, Baby- Smaragdines »