The Blood Acolyte Class for Hubris (and DCC)

Now that I’ve finished the first draft of my new Death is the New Pink project, Going Medieval on Yo’ Ass!, it’s time to jump back into other projects, including GMoYA: The Forever Dungeon and some good ol’ Hubris writing!

The new supplement will have new races as class, organizations, territories, at least one new patron, new monsters, magic items, spells, etc. and will be heavily inspired by Evil Dead, The Mist, Exorcist, The Thing, and the like.  I’m also taking a little inspiration from Warhammer and a taste of Ravenloft.

I started writing notes about a year ago, but not much beyond that has been done.  Previously I posted the first race as class, the Lupine.  Now it’s time to look at the class, Blood Acolyte.

Art is not for Hubris- artist found here.

For years you trained for countless hours in the practices of Blood Combat, the mystic arts of using the blood of your foes to fuel your rage and destroy them.  These arts have been taught to mortals by the God-king himself and you sacrificed your freedom to serve the Him, acting as emissary of His will, brutal enforcer of His punishments, and as a deadly weapon in His army.

You understand the irony of using a creature’s own blood to subjugate and slaughter them, but you have been taught to not let this cloud your judgement, for showing any pride can weaken one’s position, allowing a foe to gain an upper hand.

And now, whether you heed the call of the God-king, serving loyally as He commands, or you are an exile, banished from His glory and cast aside, you use your abilities to survive in the sodden, fog-choked lands of Downpour.

Weapon Training: A blood acolyte is trained in the following weapons: blowgun, bolas*, club, dagger, dart, garrote, polearm, shortbow, sickle*, spear, spiked chain*, and staff.  Blood acolytes tend to wear no armor or nothing heavier than studded leather as it impacts their abilities.

Alignment: While the use of Blood Combat is a violent and invasive act, blood acolytes must keep calm and focused, keeping their fury in check until the moment of violence arises.  This practice makes most blood acolytes Neutral.  However, there are extremists in the order with elevated devotion to the God-king and they could be considered Lawful or Chaotic.

Combatant: Blood acolytes have been trained to use their fists as deadly weapons.  A blood acolyte’s fists deal 1d6 damage. 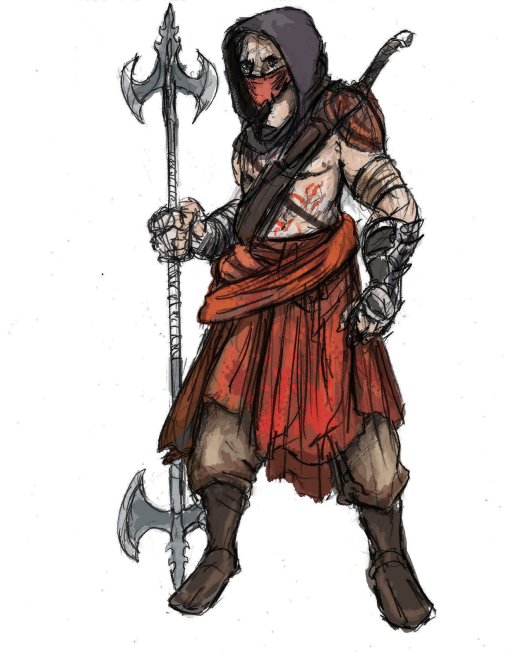 Art is not for Hubris- artist found here.

Blood Combat abilities are divided into four categories: Tier I through Tier IV.  Each tier’s is stronger than the previous and costs more in Blood Points.  To use an ability the blood acolyte must succeed a test (DCs are marked with each tier).  The blood acolyte rolls 1d20 + blood acolyte level + Stamina modifier and attempts to beat the DC.  If the blood acolyte critically fails, they cannot use Blood Combat for 24 hours, lose all blood points, and suffer the effects of Hemorrhage (pg XX) appropriate to their level.

Accumulated Blood Points are consumed when the ability is successfully cast.

Self-Mutilation: A blood acolyte can cut on themselves, draining their own Stamina to power their abilities.  Each point of Stamina sacrificed equals double that in Blood Points + 1d6.  Lost Stamina recovers at a rate of 1 per day.

Luck: A blood acolyte’s Luck modifier factors into their roll when rolling their save for Blood Combat.

Art not for Hubris- I found it here.

I am a History major attending a community college until I can get more financial aid and attend a four year school. I am living in NJ with my girlfriend who is currently wrapping up on obtaining her PhD in Toxicology. I love Star Wars, Role-playing, video games, working out, reading, writing, and hanging with my girlfriend, dog (Perfect), and two kittens (Birch and Brambles). My main focus on this site will be my discussion of Role-playing games and ideas and hopefully contribute something worth a damn. END_OF_DOCUMENT_TOKEN_TO_BE_REPLACED
This entry was posted on Tuesday, January 23rd, 2018 at 4:07 pm and posted in Dungeon Crawl Classics, Hubris Campaign Setting, Hubris: Downpour, Old School Role-playing, Other Systems, Role-playing. You can follow any responses to this entry through the RSS 2.0 feed.
« Death is the New Pink: Going Medieval On Yo’ Ass Session Four- Curing the Infection of Mi Mi Mi Moo Moo Moo’s Left Udder
Inspirational Images for Hubris: Downpour »

One response to “The Blood Acolyte Class for Hubris (and DCC)”