Barrowmaze Session 2- Another Group Ventures In

Whew…  It’s been awhile since I’ve gotten to roll with either of my groups.  My online group (their session can be found here) hasn’t rolled in a month and it’s been two months for my Rochester (RL) group.

Last night my Rochester group and I FINALLY got to delve into Barrowmaze.  I never got to tell them that we were stopping our Hubris game because of the attendance/timing issue and I was going for a model for easier setup and insertion.

Anyways, we rolled characters and moved on!

Aside: I was REALLY excited to start running my RL group because it meant I could use the toy I nabbed!  This really helped make things go smoother for mapping.  However it gave many of my players high school math flashbacks and at one point, when drawing the dungeon- it looked like a giant cock, so I got tons of cock jokes and when time to choose a direction, the resounding cry of, “to the tip!  Just the tip” went out. 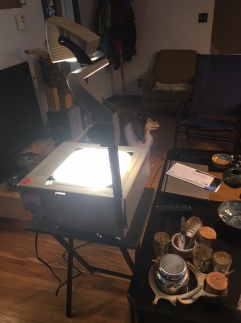 As with my first session with the other group, I gave these guys a choice- start on the Barrowmounds or start in the dungeon proper.  The group chose to go dungeon diving! 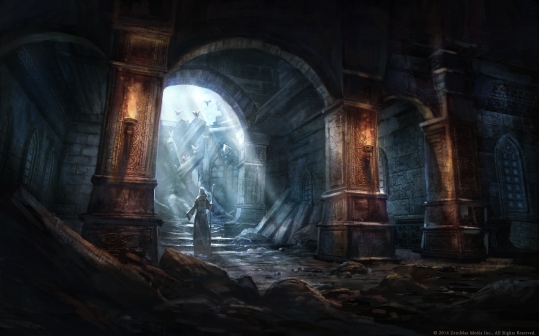 The group was super paranoid about opening any doors… I don’t know why- it’s like they played Hubris for nearly a year or something.

The group found an alcove with burial alcoves with a bunch of coins, but were set upon by fire beetles. 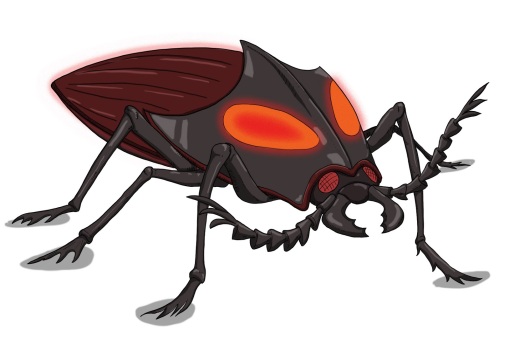 The fight was pretty quick- Sammi used Sleep to great effect, but not before DJ was subject to two attacks, one being a critical hit (he went from 14 to 4 HP).  The group killed the beetles and Angie harvested four flame sacks for later use (1d4+1 damage- acts as Flaming Hands.  Each one has 1d4 uses).

The group then made their way into a room with statues.  Each had a secret compartment at its base filled with X amount of gold pieces.  Jamie’s halfling was climbing on one for the fuck of it while Nate’s warlock tried to pull the statue down on him- again for the fuck of it.

A giant cobra snake burst out of the rubble and a fight ensued- none of the group got hit (damn), and they made quick work of the snake, however both Angie and Sammi critically failed their rolls to retain their spells- meaning they lost the ability to cast any spells for the rest of the day.  Also Nate pushed over the statue that Jamie was on onto the snake for some good damage.

The group noticed a bunch of gold in the fallen statues base, so they set to checking the rest.  Kevin found a complicated trap on one and tricked Jamie’s halfling (intelligence of 4, yo!) into opening it.  Jamie did and a dart of Petrification flew out and stabbed Jamie in the forehead.  Jamie rolled his Con save and critically failed- boom!  One halfling statue.  The group was more bummed they couldn’t loot his body than for their fallen comrade (Jamie rolled up a new character- an Elf Cleric).  The group moved on.

We explored a few more hallways, but then it was time to end.

The group “magically” made it back to Helix, gold was divided up and experience was given for the night- putting them all at 2,100 XP.  They leveled up and we wrapped up.

For both groups when we start next time- the opening will be the option of carousing, buying new gear, hearing rumors, etc. and then moving into the dungeon.

After Thoughts: I’ve run two games now and thus far this model is working extremely well.  We’ll see longer play, but Barrowmaze is pretty much ZERO prep and I just have to restock the dungeon and make a few notes (I’ll do a post on this soon) and that’s it.

I am designing something with this philosophy in mind for Death is the New Pink and Hubris (but fuck knows how long that’ll take).

If my group tires of dungeon diving/wants something fresh while I’m still writing my shit before playtesting is ready, I’d switch them to Hot Springs (here and here).  Seriously it is a beautiful setting and it can be run as a dungeon-style hexcrawl using my same model.  You explore X long- magically make it back to camp/the ship at the end of the session and rest up, etc.  I got to play in a game at Gen Con with Donnie and Jacob (the creators) and it was fucking fantastic.  I cannot say enough about the gorgeousness of these books- get em!

I am a History major attending a community college until I can get more financial aid and attend a four year school. I am living in NJ with my girlfriend who is currently wrapping up on obtaining her PhD in Toxicology. I love Star Wars, Role-playing, video games, working out, reading, writing, and hanging with my girlfriend, dog (Perfect), and two kittens (Birch and Brambles). My main focus on this site will be my discussion of Role-playing games and ideas and hopefully contribute something worth a damn. END_OF_DOCUMENT_TOKEN_TO_BE_REPLACED
This entry was posted on Thursday, August 31st, 2017 at 5:57 am and posted in Barrowmaze, Black Hack, Megadungeon, Old School Role-playing, Role-playing. You can follow any responses to this entry through the RSS 2.0 feed.
« Death is the New Pink is Now Available on POD- Oh and a Tasty Character Sheet
Don’t Call ANYTHING a Guilty Pleasure!! »

One response to “Barrowmaze Session 2- Another Group Ventures In”