Thus far I’ve posted the Paladin, the Warlock, the Warrior classes (and Dwarf race), the Thief (and Halfling race), the Ranger class (and Half-elf and Elf races), the Cleric class (with  Half-demon race and God is in the TV deity), and the Druid Class (with Half-orc race).

Today we look at those cute lil gnomes, pesky humans, and the Wizard class. 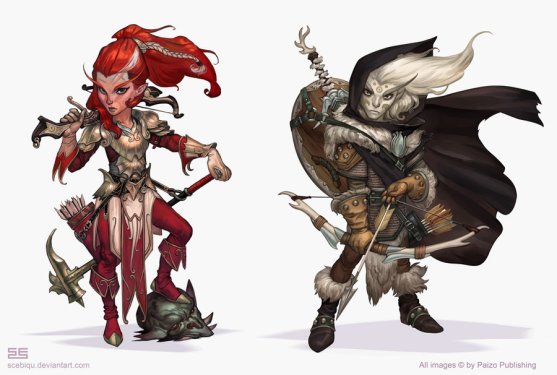 Illusionist: A gnome can cast Prestidigitation once per day.  This increases to twice per day at 3rd level.

Animal Kinship: A Gnome can cast Speak With Animals once per day.

Intelligent: Gnomes are highly intelligent creatures.  Increase the Gnome’s Intelligence to 13 if original roll was lower.

Darkvision: Gnomes can see in the dark up to Not-so-Nearby radius.

Gifted: Roll to see if all attributes increase by 1 as if you have leveled up (pg XX).  You do not get to reroll any failed attempts (pg XX).

And now the Wizard class

SPECIAL FEATURES
Strong Mind: Roll with Advantage when testing INT to avoid damage or effects from spells or magical devices.

Read Magic: Wizards can decipher magical writings by studying them for a few minutes and successfully testing their Intelligence.

Familiar: The Wizard has a loyal familiar that assists them in many ways.  The creature often is a bat, rat, toad, cat, raven, etc. or even a devilish Imp or Homunculus-type being.  The creature has 1 HD and can deal 1d6 damage.  The Wizard can deliver touch spells through the Familiar and can communicate telepathically with the being.  Should the creature die, the Wizard suffers 3d6 damage and is stunned until they succeed a CON test.  They can summon another Familiar a week later (costs 1d6x100 gp and takes 1d10+10 hours).

Analyze: A Wizard must analyze their spellbook for an hour each morning to keep the spells familiar in their brain.  At the end of the hour the Wizard can cast any spell in their Spellbook that they are able to cast.

LEVELING UP
Roll to see if attributes increase, roll twice for INT or WIS.
ARCANE SPELLCASTING
Wizards can cast a number of Arcane Spells per day, see the Spellcasting section.

SPELLBOOK
Wizards start with a large spellbook containing a total of 1d4+1 1st level spells and one 2nd level spell from the Arcane Spell lists. 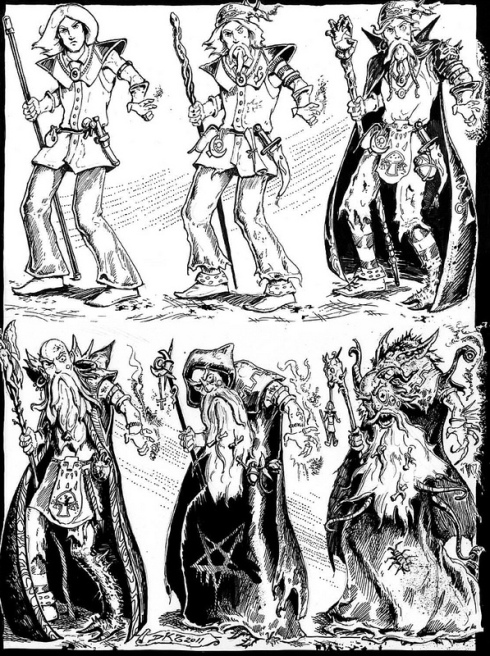 Best Wizard is still the DCC wizard- gotta love me some Kovacs art.

I am a History major attending a community college until I can get more financial aid and attend a four year school. I am living in NJ with my girlfriend who is currently wrapping up on obtaining her PhD in Toxicology. I love Star Wars, Role-playing, video games, working out, reading, writing, and hanging with my girlfriend, dog (Perfect), and two kittens (Birch and Brambles). My main focus on this site will be my discussion of Role-playing games and ideas and hopefully contribute something worth a damn. END_OF_DOCUMENT_TOKEN_TO_BE_REPLACED
This entry was posted on Tuesday, August 29th, 2017 at 6:10 am and posted in Barrowmaze, Black Hack, Megadungeon, Old School Role-playing, Other Systems, Role-playing. You can follow any responses to this entry through the RSS 2.0 feed.
« Back From Gen Con (flashing some pics)! Hubris Won an ENNIE and Demon City Joins DIY RPG Productions!
Death is the New Pink is Now Available on POD- Oh and a Tasty Character Sheet »