Thus far I’ve posted the Paladin, the Warlock, the Warrior classes (and Dwarf race), and the Thief (and Halfling race).

Known Spell: Magic courses through the blood of elves.  Each elf starts play with a single 1st level spell that they can cast once per day.

Agile: Elves are agile creatures.  Increase the elf’s Dexterity to 13 if original roll was lower.  Elves also learn how to use bows at an early age.  They are proficient in bows in addition to their other weapon proficiencies.

Strong Mind: Elves are immune sleeping spells and have Advantage on tests to resist illusions.

Keen Eyes: Elves have sharp eyes and can spot hidden passageways easier than others.  They have Advantage on Wisdom tests to find hidden doors.

Low-Light Vision: An elf can see in low-light conditions up to Not-so-Nearby distance.

Known Spell: Magic courses through the blood of half-elves.  Each half-elf starts play with one 1st spell that they can cast once per day.

Strong Mind: Half-elves have Advantage on tests to resist sleeping spells and illusions.

Low-Light Vision: A half-elf can see in low-light conditions up to Nearby distance.

Almost Human: Choose two Attributes.  Roll to see if they increase by 1 as if you have leveled up (pg XX).

And now the Ranger 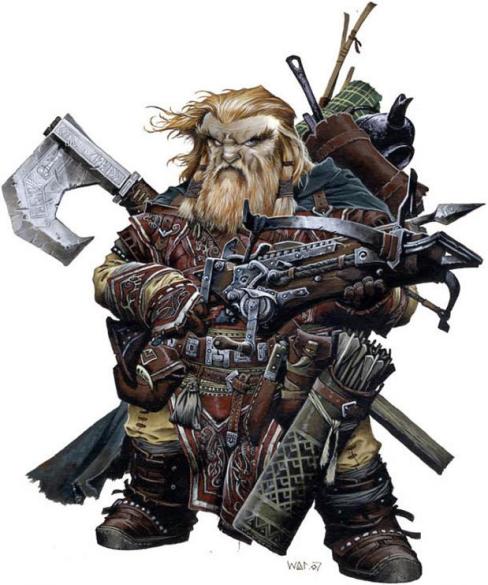 Combatant: Rangers gain an additional attack at 3rd, 6th, and 9th level.
Survivalist: Rolls with Advantage when performing tasks in nature such as finding food, tracking, identifying plants and animals, hiding or moving silently, etc.  You find food in half the time it would take a normal person.

Archer: The Warrior is handy with a bow.  They are able to fire two arrows at one target (damage is rolled with Advantage) or fire the arrows at different targets (this counts as a single attack roll per round, but attacks are made with Disadvantage).

If the animal companion dies the ranger can attempt to bond with a new one after one week of mourning.  They must go in the wilds and attempt to coax the animal to them.  A single Charisma test must be passed for this to succeed.

At 5th level the Ranger can tame a 3HD creature.  At 10th level this is increased to 4 HD.

Hatred: Rangers know how to fight against giants, trolls, ogres, orcs, goblins, and kobolds. When fighting in combat against these fiends, Rangers adds their level to their damage with a successful attack.

LEVELING UP
Roll to see if attributes increase, roll twice for DEX or WIS.