The Death Priest Class for Barbarians of the Ruined Earth, a Thundarr-inspired Setting for The Black Hack

In previous posts I showed the Robot, Beastman, Barbarian, and thoughts on the Sorcerer (and an alternative magic casting system for Black Hack).  All of these will be in the book. 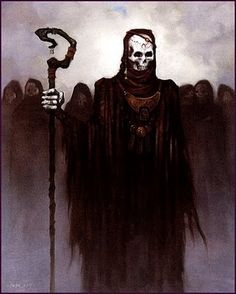 Death Priests do not serve a higher being, but rather draw energy from all those that have died since the Great Calamity to channel their abilities.  Death Priests have an intimate knowledge of the bleak coldness of death, and what awaits us all on the other side of the veil.  They embrace this knowledge and use it to bring peace to the dead, are village leaders and sooth-sayers, advance their own stature, fight against evil, quell angry spirits, or serve a Sorcerer master to gain power.

“You can’t hear their moaning, but I can.  They beg for release.  There is nothing great or divine awaiting us when we die, just a lingering limbo; a static grey ether.  The knowledge and energy of the spirits is my plaything and I will use it as I see fit.”

Knowledge of the Dead: Once per hour can channel knowledge of spirits, gaining Advantage on an INT test.

Blessed: A Death Priest has Advantage on tests against mind-controlling effects and diseases.

Recharge: Once per day, after resting an hour a Death Priest can make a Luck roll.  If successful they regain the use of one miracle.

Ritualistic: Although not a spellcaster, a Death Priest can channel the energies of the dead to aid in rituals. When casting a ritual, they roll with Advantage.

Starting at 2nd level a Death Priest can cast any of the following Miracles. They can cast a number of Miracles equal to half their level (to a max of 5 at 10th level).

Heal: Can touch a target and heal them for 2HD of hit points.

Speak With Dead:  The Death Priest can talk to a Nearby corpse of the unseen spirits and ask them up to three questions.

Bolster: The Death Priest touches a target, making them immune to fear effects for 24 hours.

Heighten: The Death Priest can touch a target, giving them Advantage on 1d3 rolls.

See Invisibility: The Death Priest’s eyes cloud over and they are able to see invisible creatures (including spirits).

Darkvision: A Death Priest is able to see in complete darkness up to Far Away.  1 hour.

Curse: The Death Priest must succeed a WIS test to curse a living target. The target is cursed for 1 hour. Each time the character must make a decision roll 1d8: 1-4) do nothing; 5) act normally; 6) attack ally) 7) flee for 1d4 rounds (do not roll during this time); 8) attack self.

Harming Touch: The Death Priest’s hands become wrapped in spiritual energy.  The Death Priest must succeed on a Strength check to physically touch a target.  If successful, the target suffers 1d6 points of damage.  This amount increases by 1d6 every odd Death Priest level, to a maximum of 5d6 at 9th level.

LEVELING UP
Roll to see if attributes increase, roll twice for WIS or CHR.

LIFE EVENT (roll 1d8): 1) you were a slave and escaped; 2) you were forced to use your powers by a Sorcerer and caused much harm to many people; 3) you fell in a crevice and nearly died.  A spirit heard your pleas and guided you out.  Sometimes the spirit still comes to visit you; 4) you used your powers to pull the life force out of a pack of raiders.  Even though you saved your fellow humans, they are afraid of you; 5) you joined an order of Death Priests who believed they had a higher and more powerful calling.  You found them extremists and have since left, however they still desire you to return to their fold; 6) For a brief time you ruled over a small village of people, before being pushed out by a brave Barbarian and his Beastman companion; 7) by using calm judgement and consulting with the spirits you were able to quell a feud between families that had been going on for generations; 8) you became possessed by a vile spirit and killed several innocent people.  You have been attempting to atone ever since. 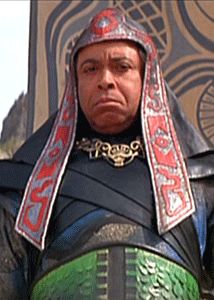 I am a History major attending a community college until I can get more financial aid and attend a four year school. I am living in NJ with my girlfriend who is currently wrapping up on obtaining her PhD in Toxicology. I love Star Wars, Role-playing, video games, working out, reading, writing, and hanging with my girlfriend, dog (Perfect), and two kittens (Birch and Brambles). My main focus on this site will be my discussion of Role-playing games and ideas and hopefully contribute something worth a damn. END_OF_DOCUMENT_TOKEN_TO_BE_REPLACED
This entry was posted on Monday, September 5th, 2016 at 3:33 pm and posted in Barbarians of the Ruined Earth, Old School Role-playing, Other Systems, Role-playing. You can follow any responses to this entry through the RSS 2.0 feed.
« The Barbarian Class for Barbarians of the Ruined Earth, a Thundarr-inspired Setting for The Black Hack
Barbarians of the Ruined Earth- Episode 1: Battle Over the Heavy Metal Throne of the Eclipse! Part 1 »

13 responses to “The Death Priest Class for Barbarians of the Ruined Earth, a Thundarr-inspired Setting for The Black Hack”