I just returned from a kick ass get together in Richmond, VA, dubbed WAYNECON!, with some truly awesome peeps!  I got to meet fellow games (and friends) in real life who I’ve been talking to for several years.  It was truly a kick ass experience. 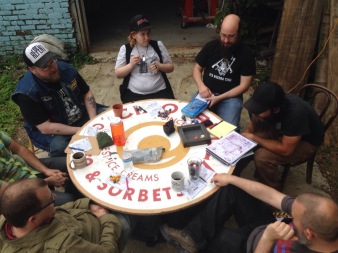 Anyways during the festivities someone put Thundarr the Barbarian on the projector screen.  I haven’t seen this cartoon since I was a wee child, so for me it was like watching it for the first time.
I loved it.  It’s epic awesomeness and the adventures are amazing and totally fits with the type of games I like to run.

As I was watching Thundarr it really hit me how this show really hits the low mechanics/crunchy bits mantra for me.  The way I see it is each character has one ability (maybe two or three if you want a few) and that’s it.  It really puts the importance of the action of the story (or campaign) and the decisions you make that define your character and not the homogenous list of feats and spells.

This is why The Black Hack and Into the Odd resonate so well with me.  If I want crunchier I’ll go DCC or White Box.  I just like that simplicity and the freedom it gives.

Here’s the way I would break it down (and I’m gonna use Black Hack since that’s what I’m currently running/really enjoying).

Once per combat can deflect an attack, turning it into a failure.  If the weapon is a laser attack, roll a die and call even or odd- if you called the right result the shot is deflected back at the attacker for full damage.

Has Advantage on tests against Poisons and Diseaeses

Man-cat-bear-thing (race as class): 1d12 HP/lvl- claws d8 damage- can see in the dark (Nearby radius)

Once per hour can do impossible feats of strength and be awesome (IE. lift a huge pillar of cement/vehicle/rock/etc.) and throw it, push it, or whatever.  No roll needed.

Once per combat can ignore damage from a physical attack.

Has Advantage on tests against magic and charm-like effects.

Can cast spells- keep it low magic (only up to 4th level, anything else is a ritual).

Then boom- you play and the adventures develop your character instead of “how many feats do I need to take before my character is a swashbuckler?”  Oh and I would add the thief class since people really enjoy that archetype.  I prefer this method of play.  I am not knocking those who enjoy Pathfinder, 5e, etc.  I just wanted to discuss how the simplicity of Thundarr, to me, highlights how a rule-light system is totally viable and can be exciting.

I mean in one episode of Thundarr they battled Amphibious Amazonians, a mutated giant spider, disarmed a nuclear weapon, battled a humanoid-shark lady sorcereress, and a kraken that fired ink lasers out of its tentacles… Not once was it about the long list of abilities that the characters can perform, but their actions and decisions in the situations they were dealt.

I would be remiss to not mention Chuck Thorin’s World of Durth that he is working on currently that is inspired by He-Man and all that kinda stuff!