The Star Folk travel between worlds in caravans of living starships. They declare festivals on planets where they make landfall, sharing eclectic, primitivist music, non-fabricated wares, psychedelic drugs, and xenophilic sexual encounters. In passing, they impart facets of their quasi-religious philosophy (a mishmash of elements of ancient mysticism) that embraces the seemingly conflicting elements of radical individualism and universal interconnectedness. They also play practical jokes and minor confidence games meant as performance art on authority figures and those they consider too narrow-minded.  Star Folk of all ages presumably exist, but the ones most frequently encountered as visitors to other societies are in their teens or twenties— or at least that’s how they appear. Some engage in radical body-shaping, modifying their baseline form or changing their sex on a temporary basis (SS, pg 21).  Here’s what Trey has to say on the matter.

Gamblin’ Folk: Pretty much all Star Folk learn the tricks of the trade of their people and how to take people to the cleaners.  Star Folk start with a d6 in Gambling (Smarts).

Lucky: Star Folk are known to be shucksters, cheats, and tricksters.  This has gotten more than a few of them into deep trouble with the wrong type; however they always seem to get out of trouble.  Star Folk have the Luck edge (SWDX, pg 33).

Artistic: Star Folk are artistic and playful, often times playing their trades to barter.  Choose one skill to start at a d6 (or create one that is along these lines): Music (Smarts); Art (Spirit); Sculpting (Spirit); Dance (Agility).

Not to be Trusted: The reputation of Star Folk is known far and wide.  Star Folk suffer -2 to Charisma with people who have heard of their confidence artist ways.

Doesn’t Believe in Money: Star Folk don’t use currency, preferring to ply their trades and barter for goods or services.  Should a Star Folk receive money (either through gambling, stealing, or gratuity), they tend to forget about it shortly after acquiring it.  Star Folk will only hang on to money for 24 hours before discarding it.

The Kuath are known throughout the galaxy as the fanatically conditioned shock troops of the Empire. They are seldom seen outside of their 2.5 m tall bio-armor suits, but they are near baseline humans, rarely older than their teens. The real Kuath are the culture these adolescents hail from, a Neolithic people living in coastal settlements with a symbiotic relationship with marine invertebrate collective intelligences known as Naga Ma— Dragon Mothers. The Dragon Mothers (under threat of destruction by Vokun military might) surrendered and were forced to provide armored and drugged Kuath soldiers as tribute. (SS, pg 17).  More delicious info on the Kuath.

Near Human: Kuath are near baseline human and start with a free edge.

Bio-armor: The bio-armor given to the kuath from the Dragon Mothers is strong and enhances their natural abilities, allowing them to be effective shock troopers for the Vokun Empire.  While wearing the bio-armor, a kuath’s strength is increased one step and their fists do str+d4 damage.  The armor provides +6 protection against melee, ballistics, or energy damage.  While in their bio-armor a kuath can survive in the vacuum of space for two hours before having to make Vigor checks to resist taking damage from decompression.  To keep the armor healthy, it must be soaked in a nutrient bath for 2 hours out of every 24.  If the armor has not been soaked in a bath in three days it dehydrates and crumbles to pieces.  The ingredients for the nutrient bath costs 500 credits for 5 uses.

All Thumbs: Kuath come from a Neolithic world and are not great with technology.  They have the All Thumbs (Minor) hindrance (SWDX, pg 28).

Wanted: This kuath has abandoned his duty as a shock trooper in the Vokun Empire and is now being hunted by Imperial agents.  They have the Wanted (Minor) hindrance (SWDX, pg 31).

The Vokun have a distrust of disembodied minds, so they employ “humanoid computers” in the form of ibglibdishpan savants. Ibglibdishpan neural structure and training make them logical and dispassionate — ideal accountants, administrators, and archivists. Some are trained in interpreting the emotions of other humanoids and are given careers in law or diplomacy. Ibglibdishpan themselves are notoriously difficult to read; their expressions are almost always masks of perfect serenity. Their mental structure is not without problems, however; they are prone to neural deadlocks, crashes, or other forms of madness (SS, pg 17).  Trey’s post.

Humanoid Computer: The ibglibdishpan have the ability to process mental tasks faster than normal human comprehension.  When attempting to solve a mental task (IE. Complicated math, astrogate navigation, etc.) the time needed to figure it out is reduced by ¾.  Easy mental tasks (IE. mental math, etc.) are done almost instantaneously.

Weak: Ibglibdishpan are not known for their physical prowess.  An ibglibdishpan cannot raise their strength beyond a d6.

Another fantastic voyage with Savage Worlding the awesomeness of Strange Stars. 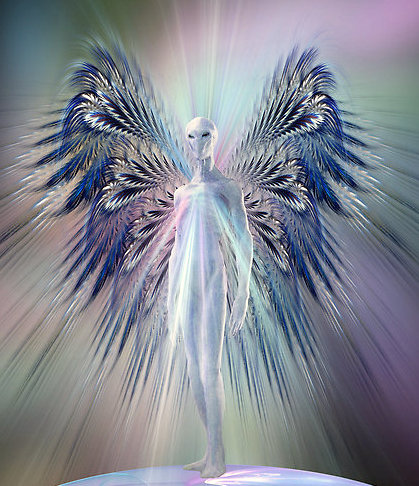 Resembling beings out of the paleo-spiritual memes of Earth, the winged deva are the most mysterious of the Alliance’s members. The deva are supportive of the Alliance and promote peace but are largely aloof from the affairs of other cultures. They are primarily concerned with their Great Work: the repair of 10 moon-sized artificial worlds in their home system. These are said to be huge brains and possibly components of an even greater mind (SS, pg 11).  Here is Trey’s post on the deva.

Angelic Wings: Deva have wings that utilize energy harmonics that allow them to fly in atmosphere or even in the vacuum of space.  A deva flies at a pace of 8 and a d8 if they fly fast.  A deva can only fly short distances in space (roughly 1000 miles) before they become exhausted and unable to carry on.

Diplomat: Even though deva are aloof and secretive, they are logical and good diplomats.  A deva begins with a d6 in Persuasion (Spirit).

Vacuum Resistant: Deva are able to survive in the vacuum of space without any protective suit and do not take damage from decompression for 6 hours before having to make Vigor check to avoid wounds.  When they make the Vigor check they receive +2 to the roll.

Secretive: Deva are extremely secretive about the Great Work.  All deva know that this work is of the utmost importance and imperative to the deva race.  A deva has the Vow (Major) hindrance (SWDX, pg 31).  A deva will do whatever it take to further the work on restoring the 10 moon-sized artificial worlds.  They will abandon their compatriots, steal, kill, cheat, etc. should it be necessary in the service of the Great Work.

Another fantastic voyage with Savage Worlding the awesomeness of Strange Stars.

The gnomes are small humanoids who live and mine within asteroids. Their society resembles that of eusocial insects; they have two castes (managers and workers) and only one Mother at a time produces young per clan. A gnome Mother is actually an external womb generated by the mating of a female and male. Gnomes are gregarious and inquisitive but slow and deliberate in their thought process (SS, pg 11).  Trey’s post is here.

Likeable: Gnomes are gregarious and friendly.  They start with the Charismatic edge (SWDX, pg 41) even if they don’t meet the requirements.

Infravision: The gnomes are a subterranean race and have evolved to be able to see heat signatures in the dark (SWDX, pg 131)

Natural Weapons: Gnomes have small claws that aid them in burrowing and delving tunnels in the asteroids they inhabit.  Their claws do Str+d4-2 damage.

Small: Gnomes are small and suffer -1 to Toughness.

Agoraphobia: Gnomes dislike open spaces and become panicked when in them.  They have the Phobia (Major) hindrance (SWDX, pg 30) when in open spaces.

A bit further in the fantastic voyage with Savage Worlding the awesomeness of Strange Stars. 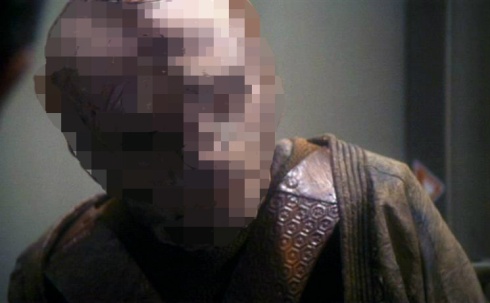 The neshekk banking and investment clans are the financial backbone of the Alliance. They have a reputation for ethical behavior and conservative investment and also for strict adherence to the letter of contracts. Neshekk are greatly concerned (possibly obsessed) with security and privacy. They never go into public without their elaborate privacy screens/firewalls, called nizara, in place. Off-worlders are restricted to certain areas of Kuznuh, and it is a misdemeanor to view any public space unfiltered by the metascape (SS, pg 11).

Banker: All neshekk have financial connections to the banking consortium for the Alliance.  Neshekk start with the Rich edge (SWDX, pg 34).

Connections: Through various business dealings and networking, Neshekk’s develop connections with various people and organizations.  All neshekk have the connections edge (SWDX, 41).

Paranoid:  Neshekk are notoriously known about their need for privacy and security.  They even employ digital screens that distort their face and hide their identity called a nizara.  Should a neshekk feel that compromised, being monitored, or if their nizara ceases to function, treated the character as though they have the Phobia (Major) hindrance (SWDX, pg 30).

Code of Honor: Neshekk pride themselves on their ethics and the ability to keep promises and deliver on the goods.  Neshekk have the Code of Honor (Major) hindrance (SWDX, pg 29).  Here’s Trey’s post on the Neshekk.

And we continue on our lovely journey of Savage Worlding the awesome Strange Stars!  Today we dissect the Blesh. 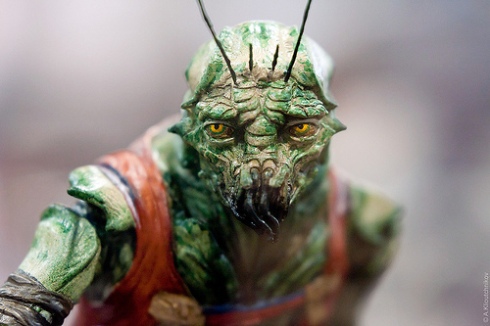 The blesh are a gestalt species blending human and nonhuman. Their insectoid bioroid forms grow like fruit from cybernetic trees on their homeworld. Their minds are a fusion of post-sapient alien intelligence with one of 1,803 digitized human minds downloaded from a crashed ark. Blesh are a peaceful species with reverence for other sophonts. Perhaps due to the human component of their minds, they have a strong curiosity about ancient human artifact (SS, pg 11). Here’s Trey’s post on the Blesh.

Chitin: The thick carapace of the blesh gives them +2 armor (this can be negated with AP weaponry).

Cybernetic Enhancements: Blesh are “born” with several cybernetic enhancements when they emerge from their flesh pods that are attached to their cybernetic tree.  A blesh gets to choose two cybernetic packages at character generation for free (click here for cyberware package options, pg 17- actual conversion for Strange Stars coming soon).

Multiple Arms: Blesh have 6 arms.  This grants the blesh one extra non-movement action per limb and they do not incur the multi-action penalty (SWDX, pg 22).

Knowledgeable: Blesh all have an interest in ancient human artifact.  They start with a d6 in Knowledge (Ancient Human Artifacts)(Smarts).

No Harm: Blesh revere other sophonts and will not do deadly harm under any circumstances.  A blesh has the Pacifist (Major) hindrance (SWDX, pg 30).

Curious: Blesh are curious about the galaxy, species, and many other points of interest.  Blesh have the Curious (Major) hindrance (SWDX, pg 29).

Slow Healers: When the blesh are away from their cybernetic trees they heal slower than normal creatures.  Increase the time for natural healing rolls to 7 days instead of the normal 5 (SWDX, pg 78). 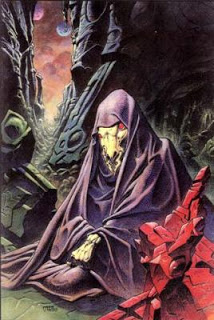