Arcane archers are rangers that have begun dabbling in the arcane arts to imbue their arrows with special properties to aid them in combat.  With a bow in hand, an arcane archer is a deadly adversary that uses their ranger training to track down and destroy enemies and vile horrors with extreme prejudice and accuracy.

Enchanted Arrows: At 3rd level an arcane archer can enchant a select number of arrows with elemental damage.  The ranger can imbue three arrows per day with fire, frost, or electricity.  On a successful attack the imbued arrow does an additional 1d6 damage (of chosen element).  Once per day after the ranger finishes a short rest they regain the ability to imbue one additional arrow.  Once used, the ranger must take a long rest before they can use it again.

At 7th level the number of arrows an arcane archer can enchant is increased to 5.

At 11th level when an arrow that is imbued with elemental energy critically strikes an opponent it explodes, and rather than dealing 1d6 damage to the target, it deals 1d10 damage to all targets within a 10 foot radius.

At 15th level the number of arrows an arcane archer can enchant is increased to 10.

An arcane archer can only have one enchantment on an arrow at a time.

Split Shot: In lieu of their regular attack an arcane archer can summon two spectral arrows in their hand and fire them from their bow at the same time.  These arrows will strike two separate targets.  The attacks must be resolved normally.  An arcane archer can use this ability once per day, and must take a long rest before it can be utilized again. 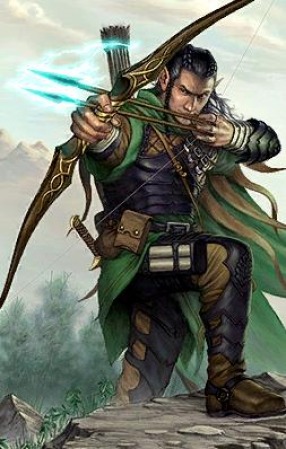 Oath of the Fallen- Paladin oath