I love goblins– I just can’t help it… I really do blame Labyrinth and the book Goblins in the Castle…  I’ve been jonsing to do a Goblins race for about two weeks now and I figured I’d better get this out of my system.

Deviation From the Norm

While most goblins are vile, black-hearted creatures, there are those who tend to get on better with the more civilized races of the world.  Their culture and behavior is still abhorrent and crass, but they are slightly more tolerable than their evil-aligned and cruel brethren. 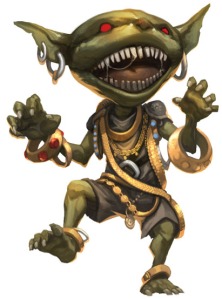 Age. A goblin’s life is short and brutal, most are lucky if they live more than 5 years or so.  A goblin reaches adulthood at the age of 3.  A goblin is elderly around 20 years and they rarely live past 30 years old.

Speed.  Your base walking speed is 25 feet.

Eat Damn Near Anything.  Your stomach is capable of breaking almost anything substance down and gaining nutrients from it.  Poisons or toxic substances will still harm and kill you, but a pile of rocks is mouthwatering and will sustain you for a day.

Distracting.  You are a distracting little nuisance.  You jump up and down in combat, shouting curses and insults, hurling small stones and other objects.  Any spellcaster within 10’ of you suffers Disadvantage on spellcasting rolls.

Nimble Escape.  You can take the Disengage or Hide action as a bonus action on each of your turns.

Languages.  You can speak Common and Goblinoid.  Goblins are illiterate and don’t bother with the time wasting that is learning to read.

Subrace.  The sheer number of the various goblin clans is staggering.  Much like the number of beetle species on the planet, it is impossible to know and catalogue them all.  Listed below are two of the less vile or horrific goblin tribes, the Bug Collectors and the Fire Breath Clan. 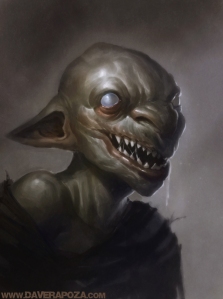 Bug Collectors are obsessed with any sort of creepy crawly, believing them to have mystical properties (and they also are extremely tasty).  Bug Collectors will look under rocks, jump into foxholes, and peak into any nook and crany in the hopes of finding more insects for their collection!

Insect Resilience.  You have advantage on saving throws against any poison on disease that is transmitted by insects (of any size).

Fire Breath Clan goblins hail from the deep swamp and are crimson in color and have red burning eyes.  They are constantly warm to the touch hate the cold.

Ability Score Increase.  Your Wisdom score is increased by 1.

Fire Breath.  You are able to belch a ball of fire at a target within 10’.  You must make a successful ranged attack (add your proficiency bonus).  If the attack is successful the target takes 2d4 damage.  This is increased to 3d4 at 6th level, 4d4 at 11th level, and 5d4 at 16th level.

After you use your breath weapon twice, you can’t use it again until you complete a short or long rest.

Fire Resistance.  You have resistance to fire damage.

You hail from the ancient Goblin City.  You served proudly in the Goblin King’s army and wear your armor proudly!  In fact you really prefer to never take it off, sleeping and eating inside of it.  It is not uncommon for a person (even a close friend) to never see your face.

At Home in Armor.  You have proficiency with light and medium armor.  Wearing your bizarre cannonball-shaped armor is second nature to you.  You can curl up inside it and sleep comfortably.  While in the armor you are considered to be wearing half plate (PHB, pg 145), however you do not suffer disadvantage to Stealth rolls.

Badass Spikes.  A ring of foot long spikes line the top circumference of your cannonball-shaped armor.  A target that falls into these (or if you charge at a target) takes 1d6 damage.