Hubris Recap, Group 1, Session 7- Further Into the People and Sprinkle of Demonic Corruption and Death…

We continue our harrowing adventure of death, disease, and horror in the DCC module- People of the Pit.

WARNING: This will have some spoilers for the People of the Pit Module, but I will TRY to keep them to a minimum.

Last session we had to leave off in the middle of a fight with six grey, three crimson, and one yellow robed and a giant tentacle in a fight of daring-do.

As with the mysteries of Hubris a fog filled the room and suddenly Nate’s, Lisa’s, and Chuck’s characters were there and Omar and Stephen had vanished… Spooky.

When we started up this session the tentacle got to hit first before I had everyone reroll initiative for the new session.  The tentacle got a natural 20 and bitch-slapped one of the redshirst into a squished pile of goo.

This fight got pretty brutal.  In the first round I rolled 6 natural 20s.  Many of the minions and slaves were killed and the player characters were badly injured (mostly Nate, Fletch, and Chuck).

After the fight was over the the group decided to head to the northern area and found four peasants wearing grey smocks collecting shluffed off suckers from a massive tentacle that was rubbing itself against the rockwall, causing the nasties to fall off.  Watching over them were two grey robed cultists. 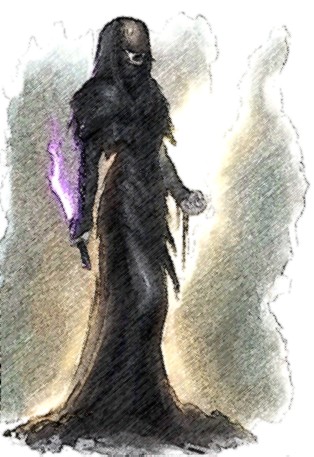 Fletch sneaked up and attempted to gut the grey robed cultists (who were facing away from the group), but only managed to get one.  The rest of the group ran into the room to catch up and help, while one of the peasants fled out of the room to the east.  The fight was over quickly and then a horrible noise rang through the caverns as something terrible began moving their way from where the one peasant had fled.

Fletch sent his two red-shirts to see what was coming and they saw this: 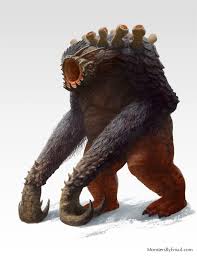 Both of Fletch’s minions failed their Will saves (one critically failed and permanently lost 1 Personality and was reduced to a gibbering idiot for 1 hour).  Fletch cast darkness on the area, to little effect.

The fight was a bit long due to the creatures thick skin and DR, but they managed to down the bitch.  Lisa was excited when the thing disintegrated into a pile of mud and rock and quickly grabbed a bunch for her minions sling.  With all the baddies dealt with, and seeing that there was nothing left worth taking, they turned around and head into the area of the cultist maze that they hadn’t gone before…

THESE THINGS DON’T GO BUMP IN THE NIGHT…  BUT THE PLAYERS DO.

The group enters an area that has clearly been delved out and comes across a door.  Lisa checks it for traps and opens it to find a sleeping area filled with sleeping mats.  He rolls three of them up and ties them to his gibbering idiot red shirt, who he has been guiding with a leash.  The corridor went splits into a “T”.  After a quick talk Lisa went left and Fletch right…  What could go wrong with splitting the party, right?

Lisa came across a small locked closet (that was trapped), but she rolled a crit success on her Luck roll, so for her the door was unlocked, untrapped, and OPEN.  Inside it there was a ton of supplies, fabric,  and a scroll case.  She popped the lock on it easily and pulled out the old parchment.  It was warm to the touch and glowing words appeared on it:

“Though the Mewling Babe had no life of his own when he was born into this world, his gift to bestow it on others is given.  This will aid in reviving a friend and then be no more.”

Aside: This was a funny part because Fletch, Liam, Nate, and Chuck all about wet themselves with excitement.  It’s a humorous moment when four grown men are shouting at the computer screen “I know what that is!  I know what that is!”

Lisa brought the supplies back to the group, keeping the scroll and some of the other stuff for herself.

Lisa went back down her path and found a workshop, stealing a hammer and running into a grey robed cultist and killing him and his tentacle innards easily. 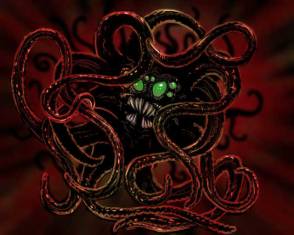 What lies within the cultists is pretty nasty.

Fletch meanwhile found a door at the end of his corridor and heard an unsettling chanting from it.  The rest of the group got impatient and went to help him.  They burst into the room thinking that they will easily kill whatever is in here… and utterly fail.  No one died, but Chuck was seriously injured as was Nate.  They rolled horrible and the three grey robed cultists kept hitting them…  More hilarious was Chuck had two of the tentacle monster hitting him in the face constantly.  Like tribbles on steroids.

Fletch put it best…  stating that the fight reminded him of the moment in Ghostbusters when they sneaked up on Librarian.

At the end of the fight Chuck decided to use his demonic powers to heal himself, rolling  1 and thus losing part of his humanity to his demon side.  I had him roll on the demonic corruption table for the Hubris class.  He now has a spiked tail which he can attack with at a d16 for 1d4 damage and he has an unsettling presence.  Normal people will shy away from him while Lawful religious will attack him outright.  Good for him.

This is where we left off for the week.  To be continued this Sunday!

Hubris Recap, Group 1, Sessions 5 and 6- Life and Mostly Death and the People of the Pit

After canceling a session and also running a playtest for a Hubris module I am writing with Group 1, we are back on track and continue where our last adventure left off with starting the PEOPLE OF THE PIT module.

WARNING: This will have some spoilers for the People of the Pit Module, but I will TRY to keep them to a minimum.

Cybill (NPC)- Cleric of Yelsa, Goddess of Sex and Violence

This session started off with several players announcing that they’d be unable to attend- oh well that stinks- so as one does in Hubris, Cybill magically appeared and the players then demanded that several of the town folks come with them to be bullet catchers…  er..  I mean provide support.

What lurks within the shadows…?

The group made their way to the pit and  I described the area where the village girls had been sacrificed for centuries.  After looking around the players decided to venture down the staircase and into the very pit itself, with both of Fletch’s red shirts taking the lead.  After about 50 steps, several grey cloaked figures emerged from a crag.  All had featureless-rubbery faces with small tentacles wiggling from their flesh.  One ran forward and began to attack Fletch’s minion while the other four began to issue a eerie moan-like chant.

Fletch’s red shirt killed the cultist in one hit, and I sensed a sigh of relief from my players…  a “Oh this is gonna be EASY!!” type elation..  UNTIL I described the cultists stomach bulge and a disgusting tentacle horror burst from it and fly at the red shirt.  It slapped him in the face and killed the poor lil mook in one hit.

Fletch decided to step in front of his mook and bring these abominations down in the name of Drallic the Flayer!!  But he failed (horribly) on his Reflex save and slipped on the stairs and fell into the mists of the pit and to his death.  Thus bringing the leveled character death toll to two thus far (in both groups). 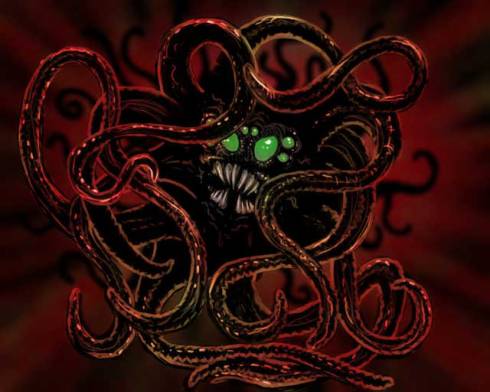 Fletch’s remaining minion (a grave digger) managed to kill another cultist AND both tentacle horrors before the whole group fled back up to higher ground so they could fan out and work together.

The fight was quick after that.  Both sides rolled poorly after that (mostly my enemies), and after the fight was over I decided to call the night because there was no way with only 2 level ones and a bunch of minions they were going to be able to proceed.

I told Fletch he could make his grave digger into a level 1 character.   He decided to go with a Shadowdancer.

Cybill (NPC)- Cleric of Yelsa, Goddess of Sex and Violence

This session started back at the pit, each player having 2 red shirts from the village and Liam also controlling Cybill.  The group proceeded back down the stairs into the pit more carefully this time, but still fell prey to sneaking grey robed cultists and traps.  Omar lost both of his minions- one died when the Omar’s alchemist attempted to burn the creature off his compatriot with a torch, setting both of them ablaze.

The second triggered a trap in a crawlspace and got a small sickle to the forehead.

John’s Ekrask was dropped to zero HP by a similar trap, but his minion quickly dug through John’s stuff, found a healing potion and shoved it down his throat in the same round.

The group explored quite a bit more and Omar became fixated on a small room where water dripped from the floor to the ceiling.  He shot his wheellock pistol at the water on the roof, deafening himself for 7 hours due to it being such a small room.  He then decided that the room must die and was about to commit suicide by causing all of his bombs to explode.  Stephen’s minion arrived in the nick of time and stopped him.

Now there is a way in this module to skip quite a bit of the dungeon.  My players found it and ventured down into the depths, bypassing a large portion of section 1.

In section two the group found 4 slaves working a mill which was grinding up grey chunks of what looked like dehydrated flesh.  Mmmmmm..

Fletch cloaked himself in shadows and moved into the next room, discovering a training area full of baddies.  6 gray robbed uglies, 3 yellow ones, and an impressive looking crimson robbed mutha.  Fletch sneaked back to the group and they formed a battle plan.  The room with the slaves forms a choke point where the cultists would have to come through.

Once combat got started Stephen threw a glue grenade, stopping all 6 grey robes in their tracks.  Omar threw a bomb, killing all six of them..  Now they just had to deal with the six tentacle horrors.

Liam, who has a whopping 6 HP at level 2 (Stephen takes the cake with 4 at level 1- who is SUPPOSED to be a meat shield), attempted to free the slaves that were attached to the mill, in order to bolster their numbers.

They yellow robbed cultists started chanting and a massive tentacle shot through the catacombs, smashing part of the mill and killing one of the four slaves. 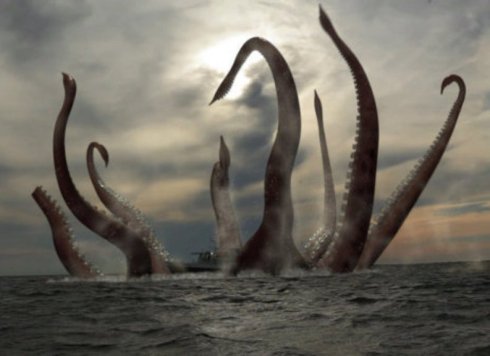 We had to leave off their for the night because it was getting late.  The group did really well and are ready to kick some ass (or get their ass kicked) next session!!!